One little straggler: the swallow that didn’t fly south for the winter

At first, I assumed it was a starling. But as the bird rose into the cloudy November sky, I realised it was actually a juvenile swallow, fully two months after I would expect to see one here in Somerset.

Swallows are the classic spring and summer visitor to our shores; the proverbial sign that winter is over and spring has finally arrived. Having returned here from their homes in Africa in late March or early April, they settle down to raise two or sometimes three broods of young before heading back south in early October.

The reason they come to Britain – and can be found across much of North America, Europe and Asia – to take advantage of the long daylight hours of the northern summer, and the resulting abundance of insect food. But as the autumn winds begin to blow, and flying insects become scarce, they must leave or risk starvation. That’s why I was so surprised to see that young swallow in November.

I’m not alone in seeing late swallows this year. The unusually mild weather has produced a number of records, mostly in the south-west. Whether they will try to stay, rather than migrate, is still too early to say.

When I began birding half a century ago, swallows in winter were as rare as snow in summer. During the fieldwork for the British Trust for Ornithology’s Atlas of Wintering Birds, from 1981 to 1984, there were fewer than 150 sightings. Most were in November, with just a handful of records from December and February, and none at all in January.

But since the turn of the century, sightings of late swallows in autumn, and early arrivals in spring, have risen dramatically, and some birds are staying all year round. As the authors of the most recent Atlas survey, covering the years 2007-11, commented: “Despite being a traditional harbinger of spring, swallows are departing later with growing frequency and in some areas attempting to overwinter”. 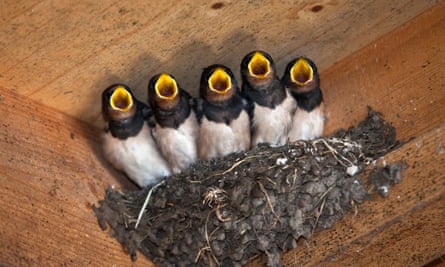 In January 2009, a lone swallow seen regularly at Marazion Marsh in west Cornwall was nicknamed “Rambo” for its ability to survive sub-zero temperatures. That same year, four or five swallows overwintered around a Pembrokeshire oil refinery, and one recently spent the winter at a sewage farm in south-east England. Although the number of January sightings each year is still in single figures, according to the BirdTrack scheme, they are on the rise.

Sadly, the chances of these stay-on birds making it through to spring are – for now at least – small. But their behaviour may change if the climate crisis continues to accelerate. Tens of thousands of years of evolution have shaped this bird’s delicately balanced lifecycle, which is now under serious threat from rapid environmental change.

While in the nest, a single brood of young swallows consumes a mind-boggling 150,000 insects. This means that, every single day, their parents need to bring back at least 7,000 items of food. But with studies showing that insects have already declined by up to 75%, the chicks are increasingly likely to starve to death.

If they do fledge successfully, at just a few weeks old they will embark on that epic journey south. If they make it across Europe and the Mediterranean, swallows then face their greatest challenge of all: crossing the Sahara. If climate change causes the Sahara to expand, their chances of survival will again be severely reduced. And even if they do make it to South Africa, changes in rainfall there could also lead to higher mortality.

Less than six months after arriving in Africa, swallows must head north again to breed. Again, the climate crisis is already exerting its malign influence on their journey. In 2019, unusually warm weather in mid-February caused by tropical air sweeping up from north-west Africa brought the first swallows back to Britain three or four weeks earlier than usual. If there is then a cold spell in late February or early March – such as the infamous “Beast from the East” of 2018 – they will be unable to feed and will perish.

Over the years, I have been lucky enough to watch swallows all over the world: from Iceland to Israel and Patagonia to Tanzania, in the skies over the Taj Mahal in India, and cruising among big game animals in Kenya’s Masai Mara. Every time I have seen these elegant birds, I have been struck by their unique combination of strength and delicacy, and their ability to overcome the dangers they face on their global journeys. Now I fear for their future on a rapidly changing planet.

Yet next spring, as I welcome the first returning swallows over my Somerset home, they will bring me hope in these troubled times; a hope I share with millions of other witnesses to their arrival, all across the northern hemisphere, from Alaska to Japan.

Stephen Moss is a naturalist and author based in Somerset, and runs an MA in Nature and Travel Writing at Bath Spa University. His latest book, The Swallow: A Biography, is published by Square Peg

No-kill, lab-grown meat to go on sale for first time

Next – a hedgehog snuffling! The lockdown lifeline capturing the sounds of Britain